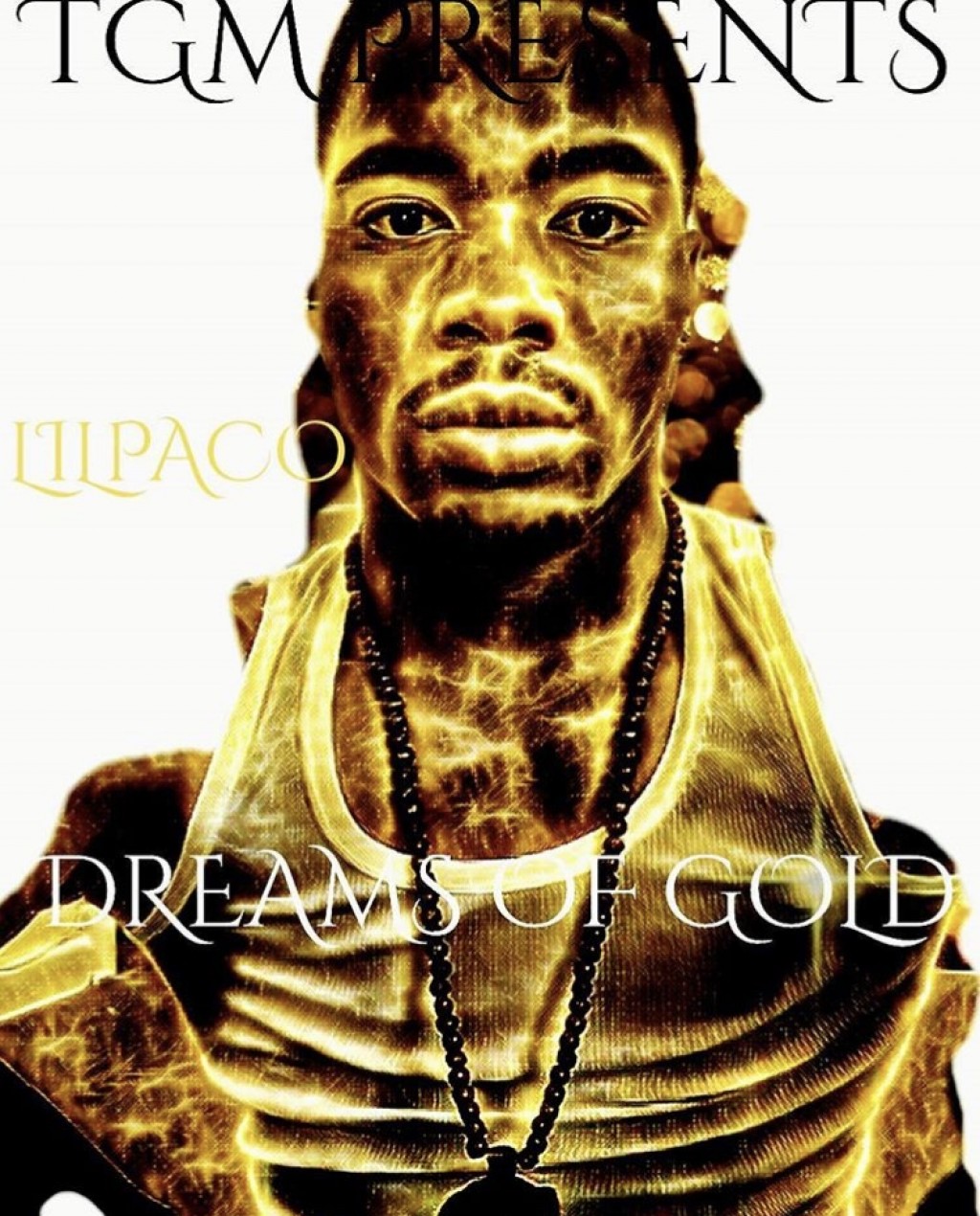 Paris DeShawn Brown had created a mixtape, Dreams of Gold, before he became the first murder victim of the year for Washington. Brown, who friends and family say had turned his life around, was one of four teeangers killed in one month in the nation's capital. Courtesy Photo.

This is the first of a two-part series on the murders of teenagers throughout the U.S.  While the nation's attention is focused on deaths in school shootings, the equivalent  number of teenage murders place every week, mostly in  African-American and Hispanic neighborhoods with little fanfare or public debate.

WASHINGTON — As 2017 came to an end in the nation’s capital, the good news of the preceding 365 days included the city’s declining crime rate. The mayor and other city officials proudly pointed to a 15 percent drop in homicides for the previous year and a 22 percent decline for all violent crime for the same period. 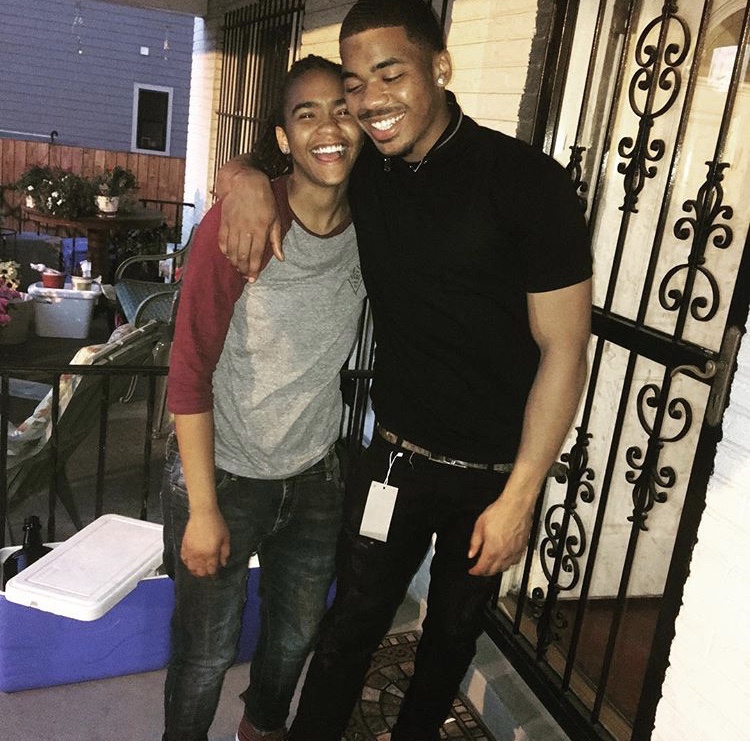 America is mourning the deaths of 17 killed in a Florida high school shooting, one of deadliest in history.  Their deaths have prompted a national conversation about gun control and how to keep children safe in schools. Lost in the debate is the fact that a similar number of children and teenagers, most of them African-American and Latino, are shot and killed every week. According to statista.com, 1,278 people between the ages of 13 and 19 were killed in 2015, on average more than 20 each week.

Instead of victims of mass murders, they are single, solitary deaths. The examples are in cities across America. In Los Angeles, 15-year-old Miracle McGowan was killed January 12 in a drive-by shooting as she and three other people sat in a car in the Florence-Firestone neighborhood.

In Dallas, Natalie Hernandez, 14, killed February 12, was fatally shot and a 16-year-old boy was wounded as they and two other W.W. Samuell High School students were sitting in a car in a city park.  In Atlanta, 17-year-old Ga'Quavious Williams was found dead in February outside of a home with a gunshot wound in the back.

Four murders of teenagers in one month is an oddity for D.C.,  and a reminder of  gun violence taking the lives of the nation’s children daily.

Paris DeShawn Brown, 19, was the first Washington resident to die of gun violence in 2018.  His body was found lifeless January 10 at the 400 block of Skyland Place in Southeast Washington. He had been shot multiple times, police said. So far, no one has been arrested.

Brown lived in Ward 8, one of D.C.’s poorest communities. Unemployment consistently runs near 12 percent, according to The Office of Labor Market Research and information. Close friends knew Brown  as “Paco.” They said shortly before he was shot, he had been released after three years in custody as a juvenile. 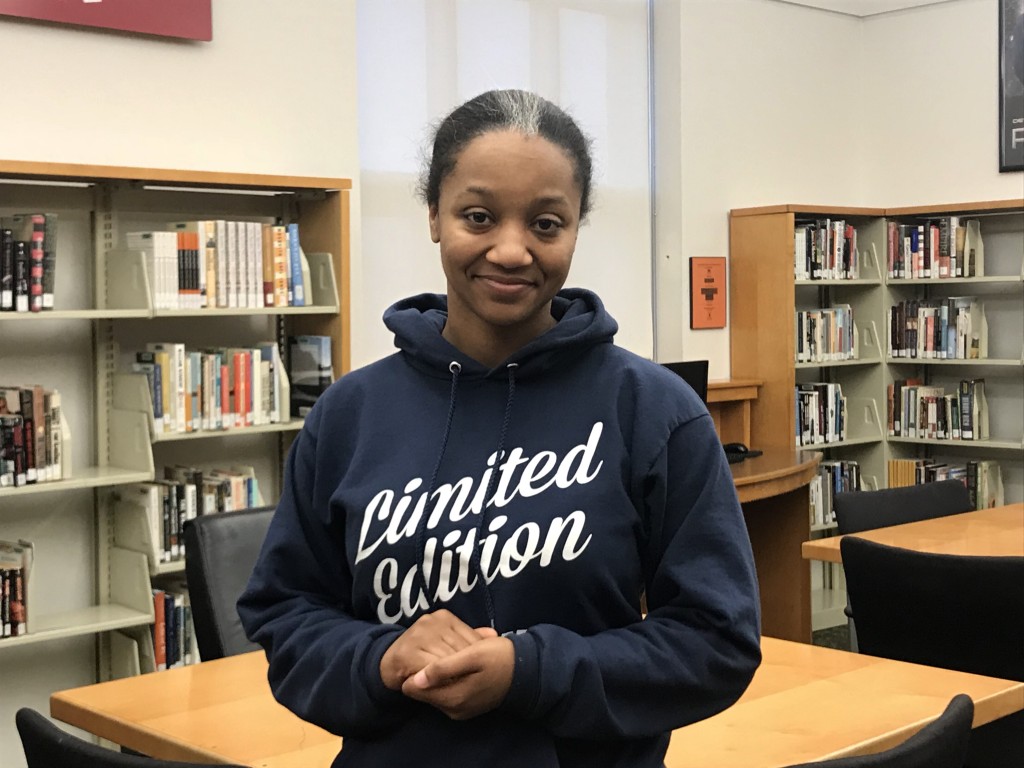 Thurgood Marshall Academy librarian and teacher, Lena Barker, said Brown
used the library as a refuge where he would read and write. Photo
by Alexa Imani Spencer

Many, including childhood companion and classmate, Larry Jones, 16, remember him as someone who naturally stood out. Jones remembers what it was like when he was released from detention.

“Everything about him was more different than any other male that I had ever met,” Jones said.

The two became friends around the age of four, he said. When Brown came home, Jones said, he immediately enrolled in Thurgood Marshall Academy, a law-themed charter school located in Anacostia where  Jones and Brown were reunited as classmates.

Jones said he saw a change in Brown.

“He was very spiritual…that was the first thing I noticed,” Brown said. “He would say that he believed God put him through certain situations to learn a lesson. Another thing I noticed is that he was really fed up with the way society ran.”

While attending Thurgood Marshall Academy, Brown began to develop a newfound social and political consciousness, said Lena Barker, 32,  a librarian at the the school for the past five years. Brown frequented the library as a place of refuge, she said.

“Paris, rather than being bogged down by that [academic] pressure, I think he learned how to embrace difficulty,” Barker said. “But he also learned that there was a space that he could come to and let that stuff roll off of his back a little bit, and I think that was here, in the library, for him.” 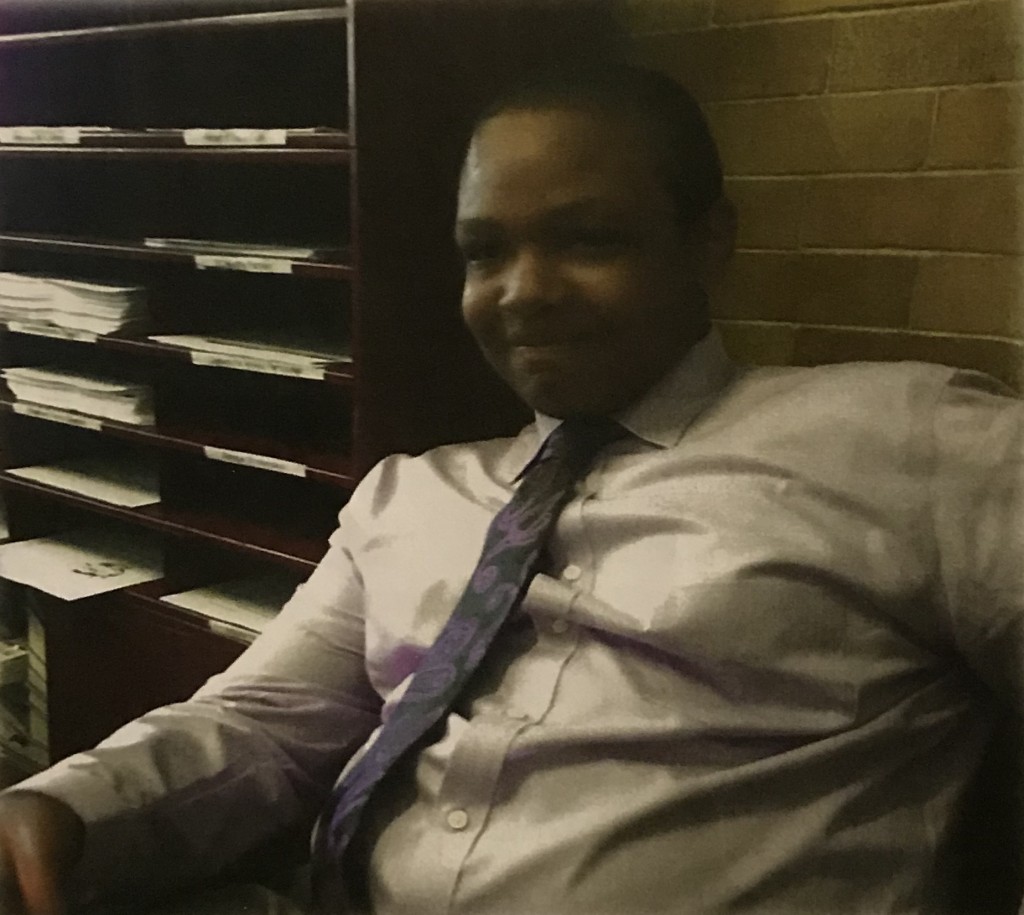 Brown had an interest in African-American Studies. So, Barker gave him books to read, including David Walker’s Appeal, The Willie Lynch Letter, and Between The World and Me by Ta-Nehisi Coates.

Everyday he sat in the same black rolling chair, Barker recalled, where he read and wrote in such a “dignified way.”

“Paris had a presence, a very special presence that I think is so hard for young black men to tap into,” Barker said. “Even in the way he would just sit in the library and just talked to me. He had no issues with being vulnerable and open.”

Over time, he shared with her some of his writings, his poetry and his music, including one of his most recent mixtapes, “Dreams of Gold.”

“I’d like to imagine that record is about what he wanted for himself and his family,”  Barker said, “and I don’t mean gold in a monetary kind of way, but I mean something bright and beautiful and valuable.”

Just two days after Brown was murdered, Davon Fisher, 16, was shot and killed near the corner of Riggs Road and Nicholson Street in Northeast Washington. He and two males were found wounded in a basement. A male suspect entered and opened fire. All three victims were rushed to the hospital. Fisher was the only one that didn’t survive.

Fisher was raised in the area surrounding the crime scene. His childhood home was just blocks away on the same street. Growing up, he collected nicknames, “Snacks,” “Chucky,” and “Fat Glo.” He answered to them all. 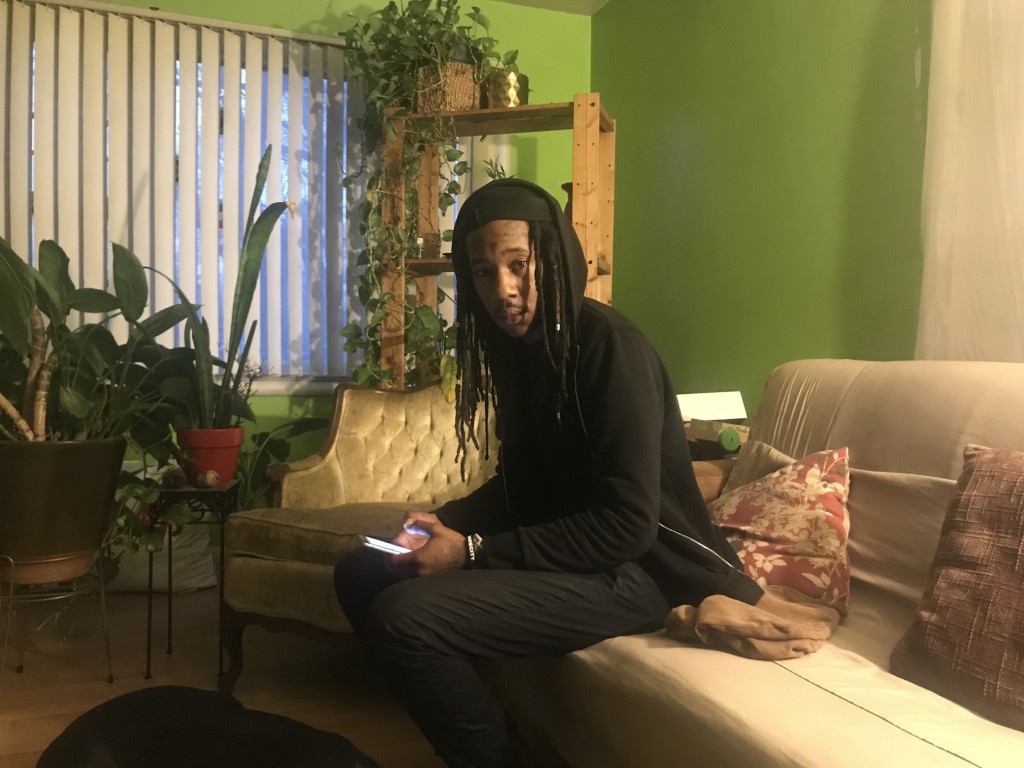 Fisher's long-time neighbor, Harrison Jackson, said he often
talk to him and other boys in the neighborhood about life.
"I tried to put positive thoughts into his head.”Photo by
Alexa Imani Spencer

Harrison Jackson, 26, watched Fisher grow up. From his front porch, he remembers Davon as a “good child” that had a natural talent for sports. Each day after school, Jackson recalled, Davon would rush to the nearby football field to practice. The sport became an outlet. Once he stopped playing, Jackson noticed a “switch” in his behavior.

“I would say when he got into the 8th grade, about to go to the 9th grade, that’s when his transition came,” Jackson said.

He started skipping school. His grades began to slide. Jackson said he tried to turn  him around.

“Every time I saw him, I tried to put positive thoughts into his head,” he  said.

One of the last conversations that Jackson had with Fisher was about life choices. Other young men were present.  Jackson encouraged them to go to school and seek success.

“I’m just trying to get my lil homies from around here to look at life way different,” Jackson said. “You can still be the coolest kid in the world, if you’re putting positive energy into the world, because that’s what you’re going to get back out of the world.” 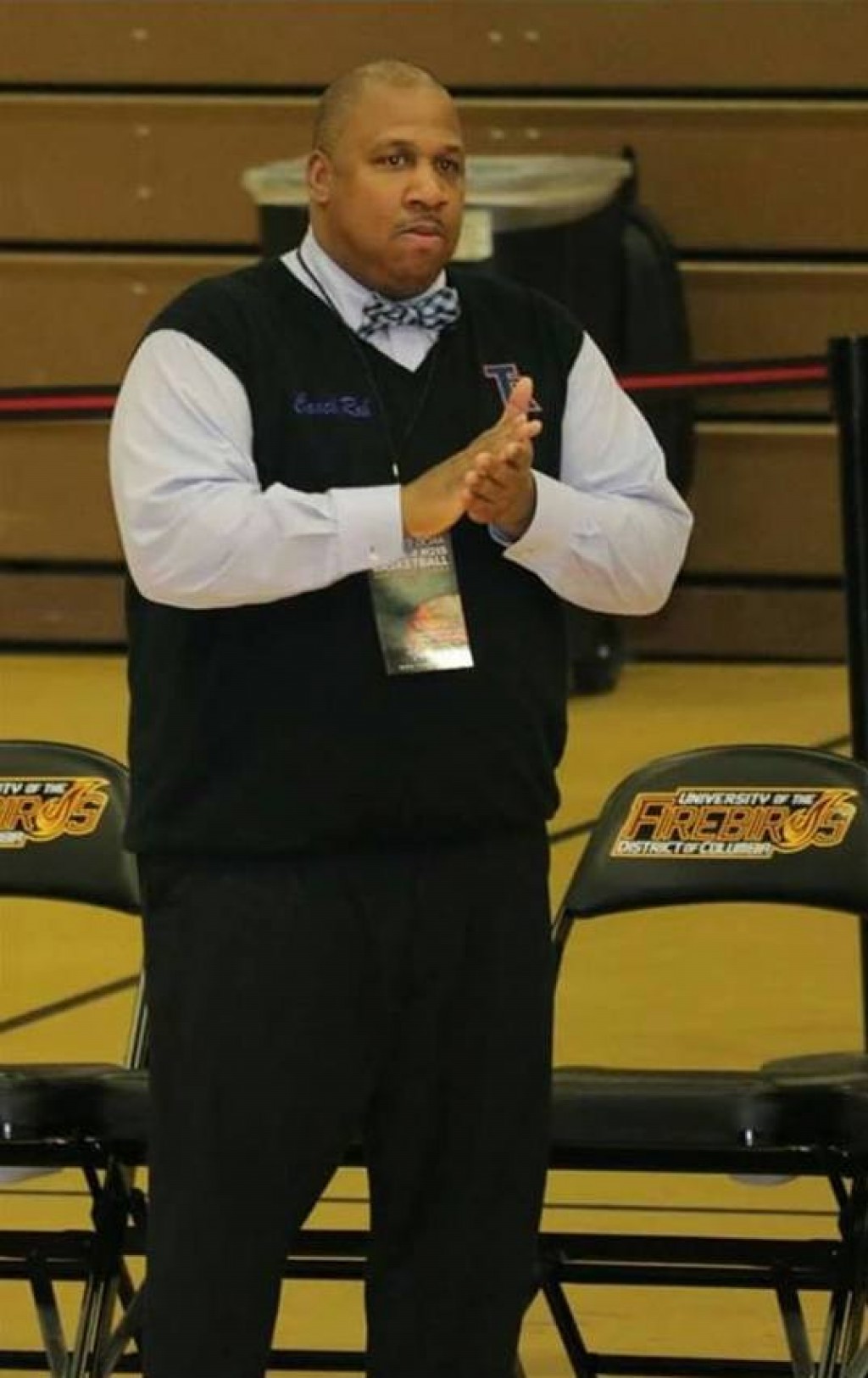 Basketball coach Robert Nickens was hit hard
by Fisher's death.  He said the boy he
nicknamed "Chucky" was like a son to him.

Robert Nickens, 45, was Fisher’s coach for a while. Nickens has served as a youth basketball coach in D.C.’s Ward 4 for twenty-five years. He does it, he said, “to give them an opportunity to do better in their lives.”

“He had a really nice three-point jump shot,” he said. “That’s something that stood out about him as a basketball player.”

Nickens described Fisher was a “great kid with a big heart.” On and off the court, he kept a genuine, caring personality, Nickens said. He had hoped that Fisher would transition to playing basketball at Roosevelt High School, where he coaches. He instead enrolled into Coolidge High School.

“As he got older, it was times where he was serious about playing sports and athletics, but he didn’t get the opportunity to do that,” Nickens said.

Despite the outcome, Nickens remained connected with Davon. Having known him and his family for many years, Nickens said, he considered him a son that he could speak with about anything.

“We were really, really close,” he said. “He was someone I held dear to my heart.”

Before “Snacks” and before “Fat Glo,” he was “Chucky,” Nickens said. He gave Davon the nickname during his childhood athletic days.

For the coach, Chucky’s death was a painful reminder of how children sometimes “get caught up in negative things.” He had a family that pushed him to be a great person in the world, Nickens explained, but it doesn’t always work out that way.

“Chucky wasn’t a negative kid,” Nickens said. “He was really loved by others. His funeral told you that. It was packed. He was a great person and he touched a lot of lives on this planet before he left.”

Claudia Joa, an 18-year-old freshman at Montgomery College has been living in Silver Spring for eight years. She moved to Silver Spring from Florida because her…

The Charters Have It

Charter Schools Prevail Over Public Schools in the District All over the city, thousands of children between the ages of two to 18 make their daily trek to school.…