Thousands flocked to the National Mall to formally recognize the dedication of the memorial of Dr. Martin Luther King Jr. Sunday morning.

After a seven-week delay, a diverse crowd listened as journalists, leaders and King’s family members spoke in remembrance of the civil rights leader who served as a champion for equality throughout the late ‘50s and ‘60s and artists performed original pieces composed and written for the dedication.

As President Barack Obama took the podium, he was greeted with chants of “four more years!” and a standing ovation. “Dr. King would be the first to remind us that this memorial is not just about him,” Obama told the crowd.

“While it is right to honor Dr. King’s words, we must remember that progress did not come from words alone; progress was hard,” the president said. “Yes, laws changed, but hearts and minds changed as well.”

He also pointed out that our country’s story of success and “standing up in the face of resistance” is why the rest of the world continues to look to us.

In light of the nationwide “occupation” protests, the morning’s speeches focused a great deal on economic issues.

“Dr. King did a lot to end poverty, but we can’t end poverty by preaching,” said Andrew Young, a close friend who protested with King and is co-chair of the Martin Luther King memorial foundation. “We need to gain economic education. We need to understand our finances.”

President Obama thought Dr. King would say unemployed workers could challenge the excesses of Wall Street without demonizing all who work there.

The Rev. Al Sharpton charged the crowd to get out and vote for those who represent justice in America.

“Just like there are those occupying Wall Street, we are gonna occupy voting booths,” Sharpton said, “and retire those who stand in our way!”

The crowd shouted and cheered when he talked about social security. “When it comes to Social Security, this is not about Obama,” he said, “It’s about our mama!”

Another King ally, the Rev. Joseph Lowery, compared the fallen leader to the founding fathers.

“An African-American preacher, who never served in public office, now stands among the fathers of this country,” Lowery said. “He has become a father of this country.”

“Throughout the struggle,” Young said, “people looked down on him, now he’s 30 feet tall looking down on everyone.”

“We honor Dr. King today in granite,” said Marian Wright Edelman, chairman of Children’s Defense Fund, “but it’s important that we honor him tomorrow in transformation of values.”

“Dr. King is not coming back; we’re it,” Edelman stressed. “He told us what to do. Let’s honor him by doing it.”

A number of people paid tribute to King through the arts. Poet and activist Nikki Giovanni recited “In the Spirit of Martin,” a poem dedicated to the leader.

“In the spirit of Martin, this is a sacred poem,” Giovanni said. “This is for the red clay of Georgia that yielded black men of courage, black men of hope.”

Four-time Grammy nominee Ledisi wowed the audience with her rendition of “What a Wonderful World.” Responding to the crowd’s appeal for “more!” she returned to the stage for a duet with Stevie Wonder.

Wonder also had the crowd jamming to his classic “Happy Birthday” song, which many forget is about Dr. Martin Luther King. The Queen of Soul Aretha Franklin performed King’s favorite song, “Take My Hand, Precious Lord,” which Mahalia Jackson sang at his funeral.

Sheryl Crow sang “Imagine,” while James Taylor covered Marvin Gaye’s “How Sweet It Is.” The Obama family joined the Dedication Choir in singing “We Shall Overcome!”

Four men who were involved with the building of the memorial thanked everyone for their support in seeing the project all the way through.

“Our historic ambition of creating a more perfect union can never end,” said Dan Akerson, chairman and CEO of General Motors. “As Dr. King showed us, the power to create a more perfect union rests in our hands. This memorial reminds us that not only can we make America better, it’s our responsibility to make it better.”

“This memorial serves as a reminder of the legacy of Dr. King for generations to come,” said designer Tommy Hilfiger, who has a foundation in his name. Hilfiger and Akerson were joined by Rod Gillum, chairman of the board of directors of the memorial foundation, and Gary Cowger, co-chair of the memorial executive leadership committee.

The King memorial, crafted by sculptor Lei Yixin, stands across from the Jefferson memorial along the west Potomac river basin.

“Let us not confuse or forget what he lived for and died for,” said King’s eldest son, Martin Luther King III. 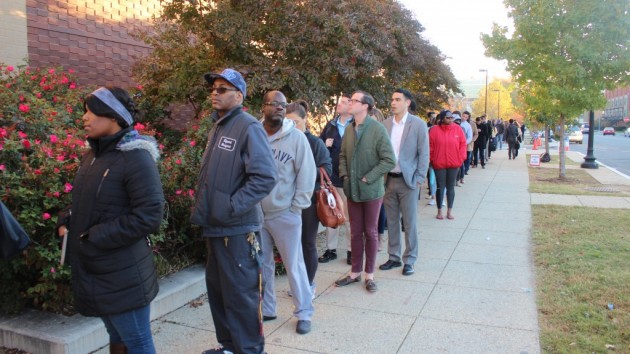