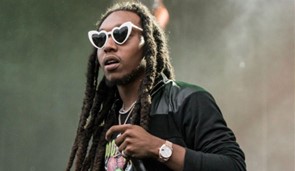 Takeoff performing at the 2017 Made In America Music Festival in Philadelphia. (Photo: Dan Garcia/Flickr)

As fans grieve the shooting death of Takeoff from the hip-hop trio Migos, they share thoughts about the graphic and traumatic videos of his body that are circulating on the internet.

“I do not agree with the videos of Quavo crying over Takeoff’s body,” Gregory Coleman, a Howard University student, said referring to the fallen artist’s grieving uncle and fellow member of Migos. “That should not be posted on the internet whatsoever.”

“It’s a violation of his privacy,” Lydia Thomas said. “It’s disgusting that such a graphic and heart-wrenching moment was capitalized on like that. Unfortunately, it is becoming more and more common.”

Migos has been a prominent and unique name in the music industry since 2008, known specifically for the creative wordplay in the group’s music and the family ties of Offset, Takeoff and Quavo.

Takeoff, born Kirsnick Khari Ball, was fatally shot and two people were wounded early Tuesday morning after a private party at 810 Billiards & Bowling in Houston, according to local police. News reports said the shooting was allegedly over a dice game.

Quality Control Music, Takeoff’s music label, requested privacy for his family members and loved ones. However, the videos of the 28-year-old’s death began to circulate almost immediately on social media and sites like TMZ.

“It feels like almost every time a Black star dies, we are subjected to seeing it online,” Howard student Marcus Gray said. “This happens all the time. This is not something new. It’s really sick the way the internet is so quick to exploit a dead Black celebrity’s body. It’s so common at this point that we don’t even realize how disturbing it is.”

One recent example of this phenomenon involves PnB Rock, a rapper from Philadelphia who was murdered on Sept. 12. Someone who happened to be there recorded and posted his body after he was shot.

King Von, a rapper from Chicago was murdered on Nov. 6, 2020, and videos of someone allegedly trying to remove his chain from his lifeless body quickly surfaced, followed by pictures of his dead body after his autopsy.

Kobe Bryant is another example. The beloved basketball player died on Jan. 26, 2020, in a helicopter crash that was photographed along with his remains and brought to the internet. These are just a few examples of this issue that has been plaguing the Black community, especially when it comes to Black celebrities or public figures.

The desensitization of violence and the disrespect for a dead body is a prominent problem on social media, according to Dr. John Bradford, a researcher and forensic psychiatrist. Bradford shared his thoughts on the uncensored violence on social media in a 2017 CBC/Radio-Canada article, “Killer Curiosity: PTSD Risks Associated With Watching Graphic Videos.”

Bradford has also been personally affected by the exploitation of personal tragedies. He explained throughout his research and work that people fail to understand how certain videos can affect viewers when they post them online for anybody to see, even causing Post Traumatic Stress Disorder (PTSD) in some individuals.

“What people do not realize is the power of video to affect certain people, to cause vicarious trauma or full-blown PTSD. We cannot minimize the powerful effect of these types of videos,” Bradford said. “Something different happens in our brain when we watch violence we know to be real compared to watching violence in film.”

Howard student Akai Higginbotham doesn’t understand the motivation of someone shooting images of someone in need of help. “It’s extremely disrespectful to Takeoff and his family that this video is continuing to be circulated and that it was even taken in the first place,” Higginbotham said.

“Your first thought when seeing someone get hurt should be to figure out how you can help whether that being going to get help, alerting authorities or helping them yourself if you are able,” Higginbotham said. “Your first thought should not be to take out your phone and start recording.”

Takeoff was somebody’s son, a cousin, a nephew, a brother, a best friend, a partner and a public figure. “We have to cherish our people because we don’t know how long they’ll be here,” Coleman said.