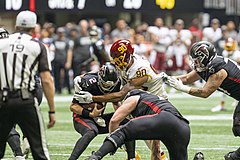 Washington Commanders make an aggrieve play against the Atlanta Falcons, 2021

Around three years ago, many controversies arose in our nation regarding race relations and lack-thereof. In the middle of this national turmoil, many callouts were made throughout the country to address any possible underlying offensive intentions. During these revisions, Washington’s Football team became subject to scrutiny.

For as long as anyone could remember, or more specifically since 1933, Washington’s NFL Team has been the Washington Redskins. However, in 2019, many Native American groups and citizens felt the name promoted racist and pejorative language. In addition, after two seasons with no team name, the Commander’s organization lacked a comparable fan base to other teams in surrounding areas, primarily due to a lack of structure and the level of uncertainty the team presented both on and off of the field. As a result, the team went without a name and has been addressed as the “Washington Football Team” for the past two seasons until announcing their new title in February 2022.

“Personally, I’m old school so the Commanders is a name that I will have to adjust to,” said Randy Smith, D.C. native and Commanders fan. “Since it’s a new name, the organization will really have to create a team culture that the city can stand behind.”

“I agree that the change was necessary given that the name and the logo of the team was considered racist,” Smith said. “But with that, I don’t think that getting a new name will help the team’s performance. It’ll ultimately be up to the players and coaching staff to make some actual change within the organization.”

Some are under the impression that a new team name will impact the overall team culture and identity. Since their 2019 season, The Commanders improved to two, seven-win seasons under Ron Rivera’s lead. As the standard rises, hopefully the city support will correlate.

“I think that the name is terrible and has no correlation to the team or city,” said Alex Taylor, Howard University senior. “When you look at the professional sports teams here in D.C. like the Nationals and Capitals incorporate city elements that help to accentuate DC’s character”.

In contrast, there is a group of people who fully support the teams new name and endeavors, and are viewing this change as a step in the right direction. Head Coach Ron Rivera put out a statement on NBC Sports Washington, stating this opinion on the name changes over the past three years.

“That’s kind of a unique situation, you know? It’ll make for some interesting trivia someday. It’s kind of a cool thing to a degree,” Rivera said. ‘I kind of grew fond of being known as the Washington Football Team or ‘the team.’ That was kind of cool. I’ll remember it fondly. The name change came about during a fragile time in our society more so than anything else. I think it was an appropriate decision to change the name.”

Alexis Dotson, a member of the Commanders’ Player Development team is enthusiastic about what is ahead for the organization.

“I feel as though Commanders is a fitting name for us being where we are located on the map,” Dotson said. “I do think it has been a major adjustment, as people are still catching on to the change.”

“But in saying that, we live in a completely different era and time,” she added. “With the climate that we live in, I can see how this name change was deemed necessary. I think we have to remember when the name change was truly enforced and what was occurring throughout the world.”

“So it’s a start. It is a start to a new era, somewhat of a new slate. We have new leadership that truly focuses on creating change and genuinely improving the organization as a whole.”

As the Commanders are currently 7-5-1, going into their game against the New York Giants, tonight at 8:20 p.m. EST.