From musicians Kem and Floetry to actresses Whoppi Gholdberg andVivica Fox, Shellee M. Haynesworth has exchanged ideas with amultitude of entertainment professionals. She has worked fornumerous television stations including C-SPAN, CNN and BET.

But it is not an impressive resume thatearns her the respect received from colleagues and friends. It isher ability to stay true to self, promote diversity and effectchange without jeopardizing her success.

President and founder of IndigoCommunications, Inc.,

a firm specializing in film and videoproduction, event management, marketing and public relations,Shellee Haynesworth is a leader in her field.

She is the first African American presidentof the DC Chapter of Women in Film and Video, a member of the BlackPublic Relations Society and has worked with the DC Chamber ofCommerce and National Television Academy of Arts and Sciences.Despite the fact that her work reaches the Black, White and Latinocommunity, Haynesworth does not feel the need to dwell on hersuccess.

“It’s amazing to find out how much peopleknow about me when I think I’m invisible,” says Haynesworth sittingin her office in Silver Spring, Maryland. “I want to be themillionaire with the hole in my jeans,” says the University ofMaryland College Park graduate admitting she often fails to realizeher influence in the industry. Her frugal nature has earned her thenickname of “the millionaire next door.”

Reflecting the name of the business shefounded in January 1991, the decor in her office is varying shadesof blue. Abstract Black art adorns the blue sponge-painted wallsand spotlights in the ceiling give them a tranquil glow. In the airis the faint smell of patchouli incense.

Indirectly expressing her modest nature,various awards, including the Silver Telly she won in 2000 for theproduction of Viva Hollywood, which she wrote and directed for ZGSCommunications, a Latin American media company, sit against a wallwaiting to be hung. A picture with actress Vivica Fox sits atop oneof several boxes full of tapes and computer supplies.

“I’m not a big self-promoter. My Emmys arein a crate in my closet at home,” says Haynesworth shifting herweight in a royal blue love seat displaying her southwestern-styleboots.

Not only did she win a Capital Region Emmyfor her production of Latino Music Greats, an hour-long specialhighlighting Latino music artists, but also nominations for the1997 Hispanic Heritage Awards and 1998 production of TrueChampions. Other awards include the 2001 Hispanic Image Award andthe 2001 Cine Gold Eagle Award.

Although awards let the young-spiritedbusinesswoman know she is on the right track, Haynesworth does notneed recognition from others to validate her success. “As long as Iknow what I’m doing, it’s all good.”

Unlike many in her field, Haynesworth hasused her creative energy and expertise to effect change and promotediversity. Frankly admitting she once produced some “rump-shakervideos,” as she aptly describes the explicit videos so populartoday, images she now promote are more cause-oriented.

“That’s where my destiny led me. Some of theclients that I work with now just found me,” says Haynesworthexplaining the philanthropic nature of her work.

Haynesworth argues that African Americanbusiness owners often gravitate toward their own community becausethat level of comfort is strong. However, she encourages anopen-minded and diverse attitude toward business ventures.

“I realize I can’t work with just the Blackcommunity. ZGS and Women in Film and Video globalized myperspective,” says Haynesworth. “Your mentors don’t always have tolook like you.”

Other Indigo clients include the NationalCrime Prevention Council, The Smithsonian Institution, and theNational Society of Black Engineers (NSBE), whose annual GoldenTorch Awards she has produced for the last several years. Clientsrespect Haynesworth for the dedication she has to her craft.

“She takes the time to understand what weare and what we want to project,” says Fleming. “We really trustthat [her] judgment will be consistent with what we are trying toproject. The organization definitely shines through and Indigogives a very polished, professional production.”

Haynesworth contends that every project isapproached with a positive attitude and as stated on the web site,Indigo will “do whatever it takes to make a projectsuccessful.”

“I try to put my best in everything. I’monly as good as my last project,” says Indigo owner. “I’ll go 60million angles to make something happen. I go through so muchnavigation to get the best final project.”

“I think clients like the fact that shetalks to them at their level. Some people in production pretendthat it’s more than it is,” contends Blunt who has worked work withShellee for two years. “She breaks things down in a way that herclients will understand. She keeps it real but she’s professionalat the same time.”

Although Haynesworth has seen so muchsuccess in her 15 years working in the field, she maintains shewould have waited a little longer to start her business if theopportunity provided itself again.

But the mother of ten-year-old Jelani, whoshe describes as a “deep brother,” still has no regrets. “I feelblessed to be able to keep it moving and provide a safe place forme and my child.”

She doesn’t relax at the end of her dayuntil she hears Jelani’s head hit the pillow, checks her emails,watches the news and occasionally her favorite cable series SoulFood or Sex in the City. “I’m a romanticist, so I want to feelgood.”

Not only does Haynesworth like to feel good,but she also likes to invoke positive feelings in others. Themusic-lover is always ready to lend an ear to colleagues andfriends.

“Shellee is always willing to listen,” saysJennifer Nycz-Conner, executive director of Women in Film andVideo, which Haynesworth has been involved with for five years.”You can come to her with your thoughts or challenges. She isalways willing to share ideas, whether they are students, breakinginto the industry or a veteran.”

Blunt, who has participated in a promotionalpiece Indigo for best-selling author Omar Tyree, agrees thatShellee is a natural-born teacher.

“I have been getting accolades on my workjust based on working with her for two years,” says Blunt as shepops a bag of popcorn during her break from an editing session.

“Shellee always challenges me to do betteras an editor. She always makes me want to take it up a notch.”

Since she began working as the President ofWomen in Film and Video, Haynesworth has been dedicated tomembership recruitment and finding benefits to help membersaccomplish their own goals and dreams within the televisionindustry.

“Working as president has been a goodlearning tool for me,” says Haynesworth. “It got me tapping intosome of my leadership qualities. I am cultivating that part of meand understanding that I am bringing something to industry.”

Nycz-Conner maintains that Shellee’sstrength has helped take the organization to another level.

“She is a very strong woman in her personallife, professional life and everything in between. A strong teamwith a strong individual leading is a winning combination,” hercolleague adds.

Developing independent films and televisionshows is Haynesworth’s ultimate goal. She hopes to one-day producea “big hit” so she can retire and being a vacationer.

“I’m a spiritual person, so I try to goplaces where I can tune into nature,” says the Virgo. “My trip toSedonia, Arizona was the most memorable because it was spiritualand nurturing.” This year she will travel to the Netherlands forthe North Sea Jazz Festival in July.

Some of her favorite artists are LizzWright, Fertile Ground, Kindred and Motown recording artist Kem,whose story of personal triumph spoke to her spirit.

“It’s a matter of time. This is a story ofnever giving up, even when you think you’re out,” she says speakingabout Kem, who recorded Kemistry, his debut album, after battlingwith drug and alcohol addiction on the streets of Detroit.

Her main goals for 2004 include, getting ashow idea picked up, renovating the 40-year-old home she recentlypurchased in Bowie, Maryland, mapping out her career exit strategyand investing her hard-earned money into a valuable property in theD.C. area.

In the meantime, Shellee Haynesworth willcontinue to work hard to ensure the success of her business,explore the world to find peace of mind, and stay true toherself.

She challenges all to “Be who you are and gowith it.” 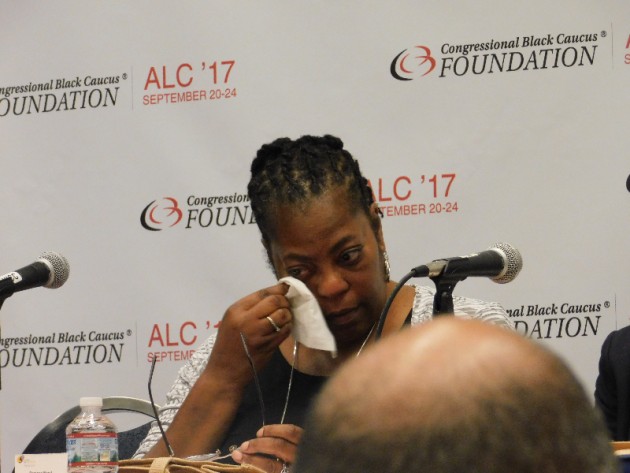