Judy Pendergast can work a crowd. Thirty-five years of working for American Airlines prepared her to pilot through the long lines and hundreds of questions from confused voters Tuesday at the Goodwill Baptist Church polling station on Kalorama Road in Northwest Washington.

The first 2 ½ hours of her first time as a volunteer poll worker were as busy and as crazy as she anticipated. Among the lasting memories of the day will be her encounter with an elderly gentleman who tottered toward the check-in tables.

“Well, I gave him all the information and he took my arm and he said, ‘I can’t read.’ So I said, ‘Stay right here.’ I got the ballot, and I helped him.”

The man only marked his vote for president, ignoring the remainder of the ticket. After casting his ballot, he turned to Pendergast and said, “I shouldn’t have come today.” Pendergast was stunned. She said his tone suggested that he had never voted before and that he felt awkward.

For Pendergast, this election was the most special election that anyone could ever vote in. “And I’m hoping tonight he’ll go home and think, ‘I was a part of this.'”

Her journey to the polls began several days ago at the Board of Election and Ethics volunteer training session.

“My training was really cursory. It was done just last week and, the Board of Elections and Ethics down on Fourth Street, they were overrun that particular day with early voters so they really didn’t have the people to train us so they gave us the handout,” said Pendergast, 60, of Adams Morgan. “They were just so busy that day; they didn’t have the personnel to do it.”

Pendergast, along with her training session classmates, were left to educate themselves on the various roles of election volunteers via BOEE literature and online demonstration videos. Fortunately for Pendergast, her precinct housed one of the more composed polling stations.

The Goodwill Baptist Church saw a few first-time voters and little problems. Even in times of high traffic, the poll workers ministered the crowd with ease.

“We did a great job because the key to doing a great job is being organized so they set up yesterday and I told them this is how we’re going to do it based on my experience,” said poll captain Linda Softli.

Softli, 63, had served as poll captain for the past 15 years and never encountered anything out of the ordinary. Over the years, her largest challenge has been voting complainers who can add chaos to her well-oiled routine.

With the help of the experienced workers of the Goodwill Baptist Church, Pendergast caught on quickly and was primed for the crazy day ahead. “It’s been really busy this morning, but we knew it was going to be crazy,” Pendergast said. But what she wasn’t prepared for was the new variety of voter demeanor.

“It’s unusual to see people in this frame of mind for an election,” Pendergast said. “Normally they just come in and they all stand in line, [but] these people are just so excited to be here.”

Voter Helen Walker, 65, said she felt wonderful. “I don’t get to vote for anything very important in the District. Even voting for president, D.C. is so Democratic. I always feel good about it; I always vote Democratic so I know that person is going to win in D.C.”

Walker said she typically doesn’t feel part of the electoral process because of the District’s lack of representation in Congress, so this year’s election is especially dear to her. The reactions of Walker and the elderly gentlemen added to Pendergast’s emotions surrounding the historic election.

“It’s been great,” Pendergast said. “I’m sure I’ll come out of this at the end of the day feeling warm and fuzzy.” 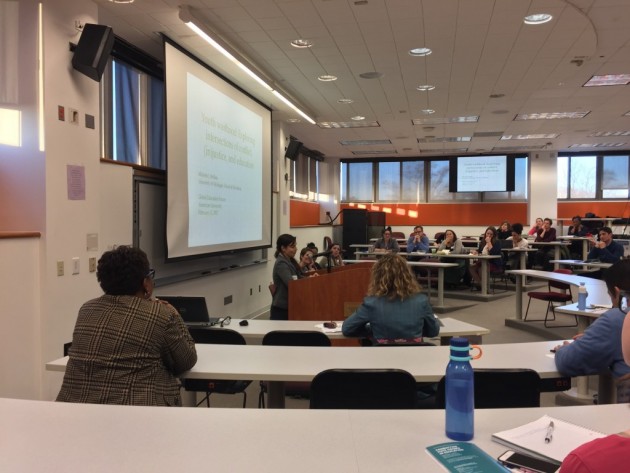