Ruby Scoops Ice Cream and Sweets is a traveling ice cream shop founded by Kamara. She started Ruby Scoops at D.C.’s Union Kitchen in October 2014. Kamara produces premium small-batch ice creams, sorbets,  and sherbets from scratch. She uses dairy and produce sourced nearby in Virginia, Maryland,  and Pennsylvania and gets her vanilla from Madagascar via Mauritius Island, which part of her family calls home. She sells Ruby Scoops online and at eight farmers markets throughout the D.C. area. Ruby Scoops can also be found at some local grocery stores.

The average loan amount for all high sales minority firms was $149,000. The non-minority average was more than twice this amount at $310,000.

According to findings from the U.S. Department of Commerce Minority Business Development Agency, these discrepancies have made minority business owners more likely to not apply for small business loans, usually out of fear of rejection.

Rabia Kamara is the owner of RubyScoops Icecream and Sweets. She loves to work with local farmers and stimulate the local economy. pic.twitter.com/a9vWXMVg17

Kamara has been cooking professionally since 2000, and on her culinary journey, she became obsessed with baking. Kamara said, “I fell in love with the process and different flavors that I can make and watching people enjoy the dessert.”

RubyScoops is dedicated to “highlighting local produce and working with local farmers, so they encourage and stimulate the local economy,” says Kamara.

Kamara’s goal is to not only produce excellent ice cream but to help people relive old memories through food particularly ice cream. She believes that food is indeed where the heart is. She wants her ice creams to bring people together in a positive way.

“I think a lot of my memory, the positive ones from my childhood and growing up are tied to food. I wanted a way to be able to experience that after finding other people with memories of their own,” says Kamara.

Owner of Charismatic Creations, Chrissy Shessey said, “Rabia brings life to her business, she brings a different kind of feel to her business than any other culinary business.”

Shessey and Kamara are apart of a women business group, and they actively support each other through their personal and professional endeavors.

Shessey said, “Not only does she bring diversity to the ice cream brand but with my cocktails that I make and her sorbet we collaborate. It’s super cool.”

Although Kamara’s mobile pop-up shop continues to expand, she talks about how her biggest challenge thus far has been locking in investors.

Dr. Michael N. Ogbolu, a management professor at Howard University, said, “if you don’t have a physical brick and mortar, it is more difficult for banks to see what they are investing in. Banks want to invest in products they can see and most times banks cannot see the vision of many minority-owned businesses.”

Since opening her business, Kamara has had difficulty with accessing grants and loans in Washington, D.C. She notes how it is especially difficult for small companies and businesses that do not own a brick and mortar.

“It’s kind of like a game of chase because you need the money to open up a storefront, but you need a storefront to get the money,” says Kamara.

Grants and loans have not come quickly to Kamara, and she has looked into crowdfunding which, she says, has been more successful. She continues to build her brand by working alongside other African-American business owners.

“It’s really tapping into my network, having them share it with other people that they know and kind of doing it that way,” says Kamara.

Kamara’s primary goal now is to gain a bigger audience during the summer months and to open her own brick and mortar. She wants to focus on getting more wholesale accounts and building audiences outside of the DMV area. 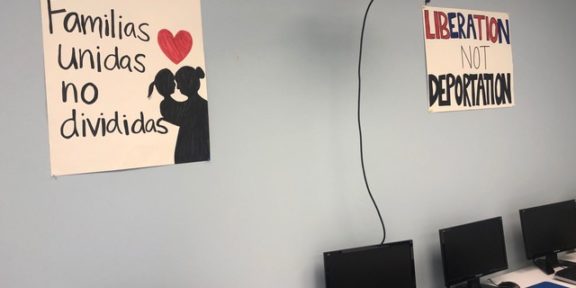