Incidents of segregation in a California prison were reported and state officials are now being accused of purging themselves when the trial was presented to the Supreme Court.

A whistleblower complaint was filed last month against the California state prison system reporting that the state allegedly provided false reports to the Supreme Court in November, reported the washingtonpost.com.

The state attorney vies that segregation does not stretch further than the first 60 days an inmate is introduced into the system, but State correctional officers and inmates claim that the segregation stretches far beyond and well into the prisoner’s remaining days in jail.

Although segregation has been outlawed for 51 years, the California state prison system feels that it is lawful, if inmates are separated for at least the first 60 days of incarceration. Guards have stated that some inmates demand to be segregated, while others need to be segregated to determine their tendency to commit acts of racial violence.

State attorneys advised the court that the only time inmates are segregation is during their “reception” into the system. Thereafter, inmates are fully integrated and are free to do as they please within the confines of the prison rules. However, many of the officers within the system and several inmates told the Press-Enterprise of Riverdale, CA of the constant segregation and racial tension in the state’s prison system.

Nathan Barankin, the attorney general spokesman for the state, said that although race is one of the few factors used to assign inmates to their permanent cells, the whole situation does not add up to segregation. He said that since inmates have the choice to request their roommates, this negates the fact that they are divided up into racial classes when they first arrive at the “reception center.”

Merriam-Webster’s Collegiate Dictionary defines segregation as “the separation or isolation of a race, class, or ethnic group by enforced or voluntary residence in a restricted area, by barriers to social intercourse, by separate educational facilities, or by other discriminatory means.”

Bert Deixler, the attorney for whistleblower Garrison Johnson, stated that inmates have no choice, but to be race oriented and divided into gangs because of their treatment prior to receiving their permanent cell assignments. The inmates are pitted against one another from the beginning and therefore instilled with an internal hatred for one another based on the color of their skin.

Deixler stated that there are signs pinned all over the prison system with the words “Hispanics only, whites only, and blacks only.”  Deixler will continue to fight to get the system changed because he feels that like many of the black activists in the past, segregation is segregation and to put all persons of the same color into one category is unlawful and wrong. 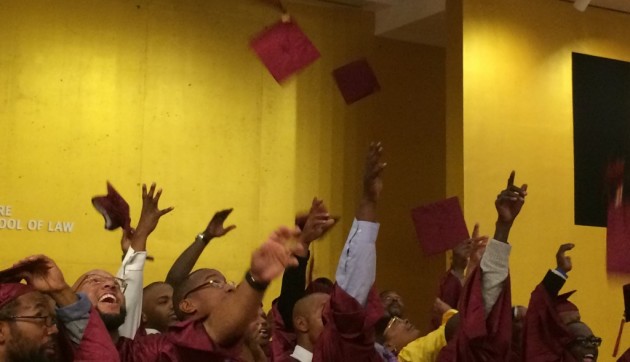 Graduates of the Public Safety Compact throw up their caps in celebration of their graduation.  Photos by Briahnna Brown, HU News Service.  BALTIMORE…